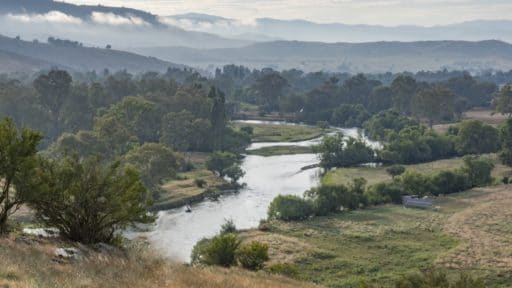 The former home of Tom and Elyne Mitchell

Looking from Farrans Lookout towards Mt Townsend, you can see the settlement of Towong. Just beyond the township on the ridge is Towong Hill Station. This was once the home of Tom and Elyne Mitchell, trailblazers of the Upper Murray and Snowy Mountains.

As avid snow skiers in the 1930s, Tom and Elyne represented Australia in a number of international competitions. They were also among the first people to ski the western slopes of the Main Range of the Snowy Mountains.

The celebrated author of the Silver Brumby series, Elyne also wrote other books on the Snowy Mountains.

With peaks that exceed 2,000 metres, the Australian Alps are the only place on the mainland with deep snow cover during winter months.

The Australian Alps are part of the Great Dividing Range, the 3000 kilometres of mountains, hills, and highlands that run from northern Queensland to central Victoria.

The section with the highest peaks of the Great Divide and the dominating feature of this region is the Munyang (pronounced Money-ang), commonly known as the Snowy Mountains.

It is believed that the indigenous people of the Upper Murray largely belonged to one of three distinct language groups: the Wiradjuri, Wolgal and Dhudhuroa. Together with the Ngarigo people of the Monaro and the Jaitmathang of the Omeo region, these groups were considered the custodians of the Australian Alps.